Recently, our family got a Springfree Trampoline.  For us, a trampoline is something that completely makes a backyard, so we were pretty excited about it…and by pretty excited, I mean so CRAZY EXCITED that it’s nearly impossible to get the kids off of it from the time they get up until they go to bed, kind of excited.

While I know that the issue of having a trampoline can be controversial, for us, we look at it as a great way to encourage our kids to have an active an active and healthy lifestyle.  You see, recent studies show that the average young child spends 3 hours a day in front of a screen.  Throw in summer vacation and I’m pretty sure that number starts soaring sky high.  Even though we’re pretty strict on our screentime, our kids are constantly begging us for more – so we had to find something even more enticing than a screen.  Enter Springfree Trampolines. 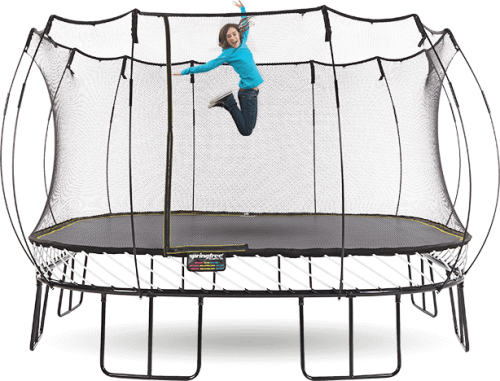 Jumping on the trampoline is a great way to burn off energy, increase muscle strength, and improve balance.  But what my kids care about is that it’s just really fun and gives them a great chance to let loose throughout the day.  And suddenly, that day is ALL THE TIME, since they’ve been jumping from the time they get up and keep asking for a later bedtime so they can jump longer.  It’s a pretty good situation over here!

We didn’t tell the kids we were getting a trampoline, so you’ve got to see their reactions when we surprised them with one:

Why are Springfree Trampolines different than regular trampolines?

At first glance, you’ll instantly notice that a springfree looks really different than a traditional trampoline.  That’s because instead of springs, it’s set up on top of fiberglass poles, so the frame is at the bottom of the trampoline, instead of at the edge.  You see, Springfree Trampolines were created because some kids wanted a trampoline, Mom said it was too dangerous, so their Dad created a safer trampoline.

You guys, this is a huge deal.  We’ve had regular trampolines before, and I always felt like it was a disaster just waiting to happen.  Those springs are scary, especially when kids are climbing on and off.  Right after we set it up, my 12-year-old was jumping, and my 2-year-old went over and starting hanging on the fiberglass poles below the trampoline.  My initial mom-response was to shriek and pull him away, but as I looked closer, I noticed he was just fine.  No pinched fingers and nothing smashed (though we did have a chat with him about not playing there in case someone were to bounce right above him and possibly hurt him). 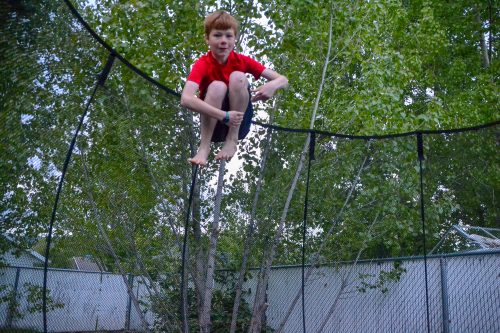 As our kids get older, the things that they’re trying to do on a trampoline get more and more daring.  And as much as I’d like to think that everything will be fine, I know that’s just not the case.  I keep flashing back to a Christmas Eve memory from when I was about 10 and my friend was jumping on the trampoline and hit his head on the frame while attempting a backflip…and there was SO MUCH BLOOD (and then the dads got together, shaved his head over the kitchen sink and stitched him right up at home – ACK!).  And the exact same thing has happened to several other people I knew (except maybe they actually got their stitches at the hospital).  Let’s just say if there’s anything that I can to do avoid a similar situation in our home, I’m going to do it.  Because as a parent, I know that there’s not a whole lot that I can to do keep my kids from pushing their limits.  But what I can do is to give them a safer environment to push those limits in. 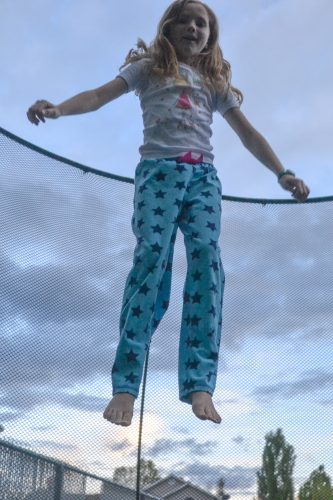 The safety net around the trampoline is also pretty amazing.  Online there are videos of people slamming into it and just bouncing back.  And while I did test it out and the net held well, it’s not something I’m sharing with the kids, lest our trampoline suddenly morph into a giant mosh pit!  It’s attached really securely at the bottom, so unlike a trampoline you’re getting at a big box store, I can’t see any way that a kid could fall out the bottom.

Are Springfree Trampolines as bouncy as regular trampolines? 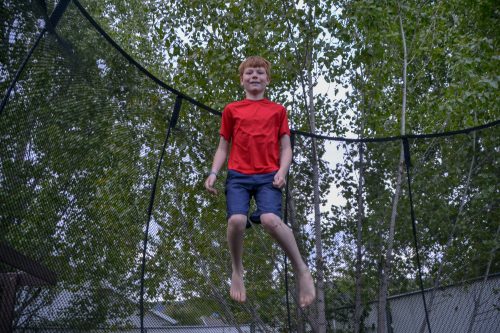 This was my husbands biggest concern when getting a trampoline, because I can tell you that we got a trampoline for the kids, but really it’s for him (he seriously goes out and jumps every night after the kids go to bed).

Why are Springfree Trampolines so expensive? 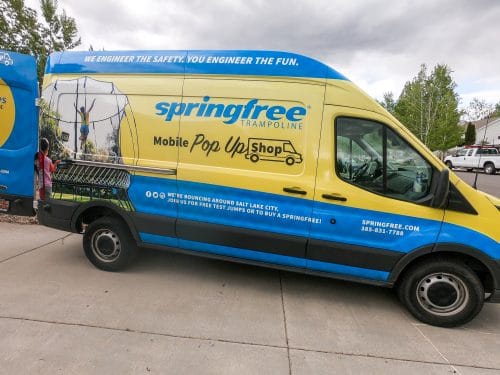 When you buy a Springfree Trampoline, you’re paying for not just the innovative safer design, you’re paying for quality.  All Springfree Trampolines come with a 10 year warranty, so you can be confident that the money you’re investing is going to go A LONG way.  As my husband keeps joking “sure the trampoline is expensive, but it’s cheaper than a visit to the ER, and who knows how many busted heads our kids would have over the years”.

At Springfree Trampolines, you’re getting a company that stands behind their product.  I’ve read TONS of reviews about their great customer service, and even though I haven’t had to use it yet, I’m assured, knowing that if I do, I’m going to get a real person to talk to who can help me.

Also, if you buy your trampoline directly from Springfree, they offer free set-up if there is a distributor in your area.  The setup team literally took 45 minutes and made it look like a piece of cake, whereas if I’d have done it myself, it would have taken hours and I probably would have been irritated and frustrated by the end (isn’t that how all assembly projects go?). 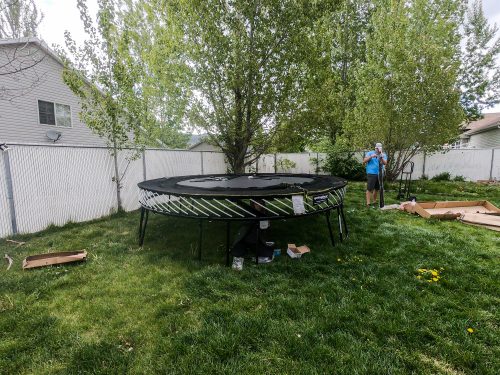 Prices and images pulled from the Amazon Product Advertising API on:

In the end, I’m sure that you want to know, do we think that Springfree Trampolines are worth the money?  YES!  If you want to give your kids a safer trampoline experience and buy a product that’s really high quality and is going to last, ABSOLUTELY! 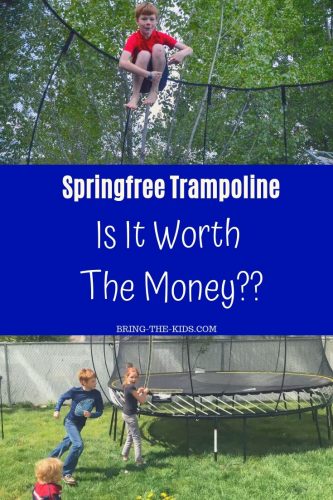 Springfree Trampoline generously donated a trampoline for this review.  All opinions are genuine and are exactly what we’d tell our friends and family.