Driving in a foreign country is always a nerve wracking experience when you first do it.  But if you’re thinking about going to Baja, you’ll find a huge variety of road conditions.  From beautiful toll roads around Ensenada, to massive potholes, to washboard dirt roads, you’ll find it all.

DETAILS
Essentials For Driving in Baja: Always carry extra water, spare tire, and a battery charger and tire inflator for emergencies like this one.

Extras:  If you’re planning on doing a lot of off-roading or sand driving, carry a shovel and tire traction mats  – these ones here are a great affordable option. 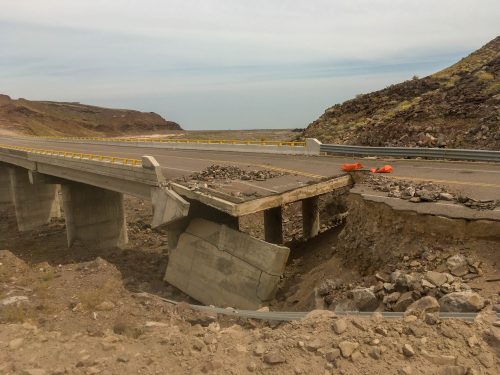 Generally speaking, the roads in Baja are fairly good.  We traveled from Mexicali, down MX5 until it meets up with MX1 and drove that to Guerro Negro.  We also drove out to Bahia de los Angeles.  We talked with many other travelers who had traveled the whole way on MX1 from Tijuana, and no one reported any problems.  The only major area of concern is the road from Puertecitos to MX1.

What is the road like south of Puertecitos in Baja Mexico?

We drove nearly 1000 miles on the peninsula, and by far the worst section of road was from Puertecitos to Highway 1 on MX 5.  A large section of this road was recently finished, but it’s now destroyed.  Last fall a hurricane came through, causing lots of flooding and washing out major sections of the road.  For about 12 miles, the road was a constant series of washed out bridges.  While all of them have detours around them, the scary part of the road is seeing the damage.  Honestly after seeing how much of the bridges had washed out, we seriously began to question Mexican road engineering.  In a lot of sections, it wasn’t just the middle sections that had been washed away, but often the supporting roads on the sides had collapsed.  Had we been there in the rain, we probably would have completely avoided this road due to the obvious poor construction.

Further south, on MX 5, the road is being rerouted and a new road is being built.  Online, there is a lot of confusion about this road, so we wanted to share our experience.

First of all, it’s very hard to differentiate where the old road and new roads diverge for a first time visitor.  Because of all the construction, you’ll find nearly constant detours.  Unless you’re up for a pretty serious 4×4 adventure, keep heading towards Cocos.  While the northern part of the construction appears to be closer to completion, the southern few miles still needs quite a bit of work.  On our way down, we tried to follow the new road as far as we could, but eventually got to a point where we were unsure where to go and the roads where looking pretty rough.  We ended up turning around and going back on the old road out to Cocos.  The road out to Cocos and then on to MX 1 was your typical dirt washboard road.  We’d heard lots of people online complaining about really poor road conditions and that it as necessary to deflate tires a bit here to prevent flats.  However, we felt like the road was pretty good.  Yes, it was washboard, but nothing really major and we saw very few rocks in the road that would cause any problems.  We were able to keep up speeds of about 30-40 mph here.

Once we were closer to HWY 1, we realized that before we turned around to go to Cocos, we had almost been to the point where the two roads meet again.  Heading back, we were feeling brave and drove past the parked construction equipment to see if the road was passable.  The good news is that YES it is, and it saved us about 30 minutes of drive time.  However, if you want to go this route, you absolutely need a 4×4 car with good clearance (ours is a Ford Expedition), and some experience picking your path over small rock fields.

Once we reached HWY 1, the road conditions were pretty good.  The main thing that you need to be aware of is the lack of a shoulder in many areas.  This can make driving a bigger rig or a trailer a bit nerve-wracking, but it’s definitely doable.  We drove out to Bahia de los Angeles as well as all the way out to Guerrero Negro to see the whales, all without encountering any problems.

Prior to going, we heard lots of reports of horrible roads and constant flat tires.  And aside from the section of MX5 that we mentioned, we didn’t see anything major that would cause us to be concerned.  If you have a trailer or an RV, you will likely have a more difficult time than just a car or truck, so 2 spare tires is recommended.

If you’d like more suggestions on what to do in Baja, make sure to check out our whole Baja Mexico Trip Report.