Wow, it’s amazing that we’re officially expatriates now.  The jet lag has passed, the kids are getting back to normal and we’re starting to figure out how to get around here in Saudi Arabia.  For the next few weeks, we’ll be writing a bit of a journal sharing our experiences of adjusting to a new country and culture.

We officially left the US on March 3 and had a 30+ hour flight ahead of us where we would land 2 days later.  To say that it went smoothly would be a massive understatement.  Our only major problem was at our ticketing counter at the first airport.  However, when you have all of the grandparents there to help with the insane amount of stuff you have plus your 3 anxious kids, it’s not too hard to deal with grouchy airline people.  Our first leg of the flight from Salt Lake to Los Angeles was actually the most uncomfortable, but I’ll tell you more about that later 😉  Everything else went more perfectly than I could have imagined!

When we arrived in Jeddah Saudi Arabia, it was almost 4 am, hot, and very humid.  What in the world were we thinking?  Honestly if it felt like that without the sun up, I was quickly doubting my ability to survive here in our new climate.

The Jeddah airport is…well…interesting.  Not only is it an old, dirty airport, but it was PACKED.  Yes, at 4am!  You would have thought this was the busiest time of day to travel 🙂  In addition to regular residents and people on business, this is the airport that everyone goes through on their pilgrimage to the holy city of Mecca.  Instant culture shock!  Not only am I exhausted, but suddenly I’m in a strange airport with thousands of Muslims fully adorned in their pilgrimage clothing, speaking a new language to me.  Thank goodness we had someone meeting us there (who took us to the front of every line and helped us the whole way) or I would have been tempted to hop on the first plane back to the luxury we saw in Dubai!

Once we finally got through customs, drove out to KAUST (where we will be living), and got our housing assignment, it was about 8am – 10pm back home!  Thankfully the kids went right to sleep and stayed that way until after noon.  Andrew and I stayed awake knowing that we needed to get adjusted to the time as quickly as possible.

We have been incredibly blessed to have wonderful friends right away who have taken such good care of us.  We connected with a few families around Christmas who not only helped us with all of our questions before the move, but instantly helped us when we arrived.  They all pitched in and took us all over that first day helping to stock our cupboards, make doctor arrangements for me, and haul us all over the place since we won’t have a car for a while.

The kids loved that first day and were quite excited about their new surroundings, especially this guy who “finally” got to see the Red Sea.  By dinner time that night, the kids were wasted and quickly fell asleep.  Not to get too excited, they all were up around 1am!  After 2 hours of fighting sleep, Andrew just turned on a movie for them so that at least the two of us could get a little bit of sleep.  After that first night the kids all slept pretty good – PHEW!

Knowing that the next few days would be the hardest, we planned lots of fun activities for the kids.  As much as we could, we kept the kids outside since they typically do better in stressful situations when they’re outdoors! 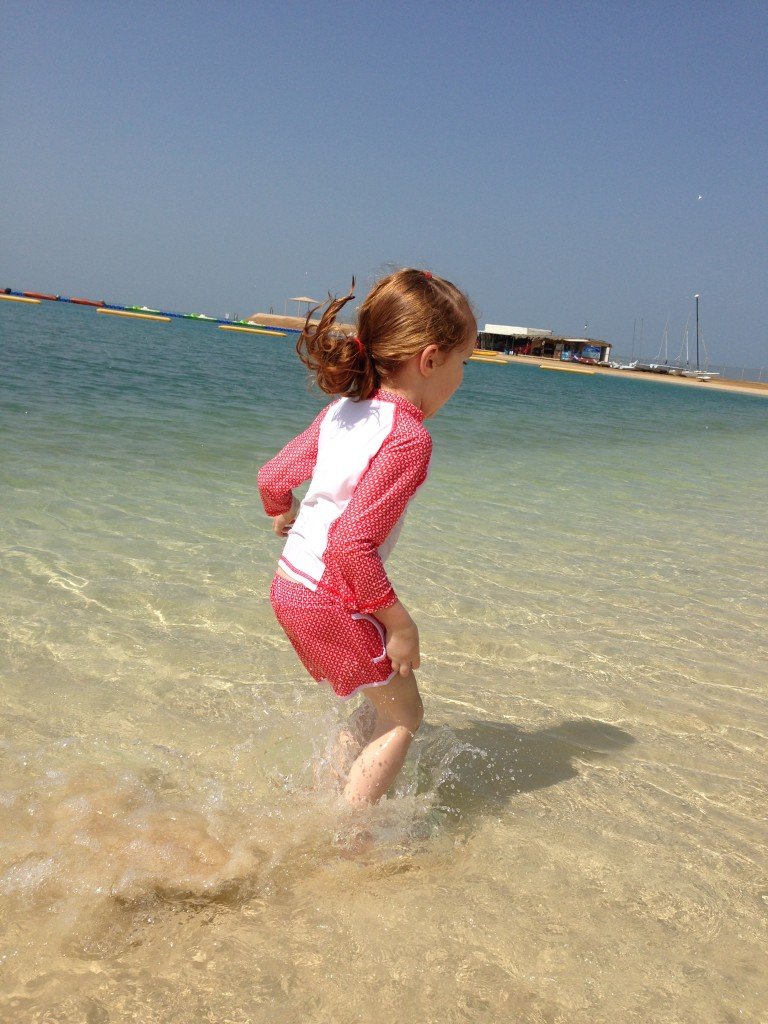 While Andrew headed to work, the kids an I headed to the beach the next day.  The beach is just a few miles from our house with a bus going right to it from the grocery store.  With lots of excitement, the kids splashed, digged, and swimmed their little hearts out.  The beach not only has lots of chairs and umbrellas (I felt like I was at a resort), but they also have toys for the kids, and lots of inflatables out in the water (like an inflatable trampoline and rock climbing wall).  Not only is the beach really fun for the kids, but there are  lots of little fish in the shallow water and non-stinging jellyfish (Mason tested that out and then caught a few dozen).  I left with 3 exhausted and super happy kids!

Our first Friday (the Saudi Sabbath) was a nice low-key day where we got together with some friends and then wrapped up the day with a perfect family walk on the beach and around the harbor.  I’m thinking that the beach lifestyle will suit us quite nicely!

Saturday (the same as Saturday in the US), we ventured into the big city of Jeddah to get some things for our house.  Although we didn’t need all of the things there right away, we’re hoping to get as settled as possible before baby #4 arrives so the sooner the better.

Life at KAUST is definitely not like the rest of Saudi Arabia.  We live in a very western and modern community, where we can pretty much go about life as we would back in the US.  There are not restrictions on women (for driving or dress) so it’s a very pleasant place to be.  Oh, and as the kids kept saying “it looks just like California here”, and it does.

So on our trip to Jeddah, we got a real taste of what Saudi is like.  I got to be all dressed in my abaya and the vast desert that surrounds us was quickly visible.  While not quite the third world slums that we had grown accustomed to in Africa, we were surely not in the US.  The outskirts of the city were surrounded by trash and big piles of rubble from demolished buildings.  Not the prettiest sight, but it was reassuring to see some mountains not far off as well (hopefully they hold some adventure for us).

A few hours of shopping was plenty for all of us, so after a nap in the taxi on the way home (about an hour), we went back to the beach.  This time with Dad around, the older kids went out to the deep areas with the inflatables and went absolutely crazy with Andrew.  I’m not sure who had more fun – the kids or their Dad! 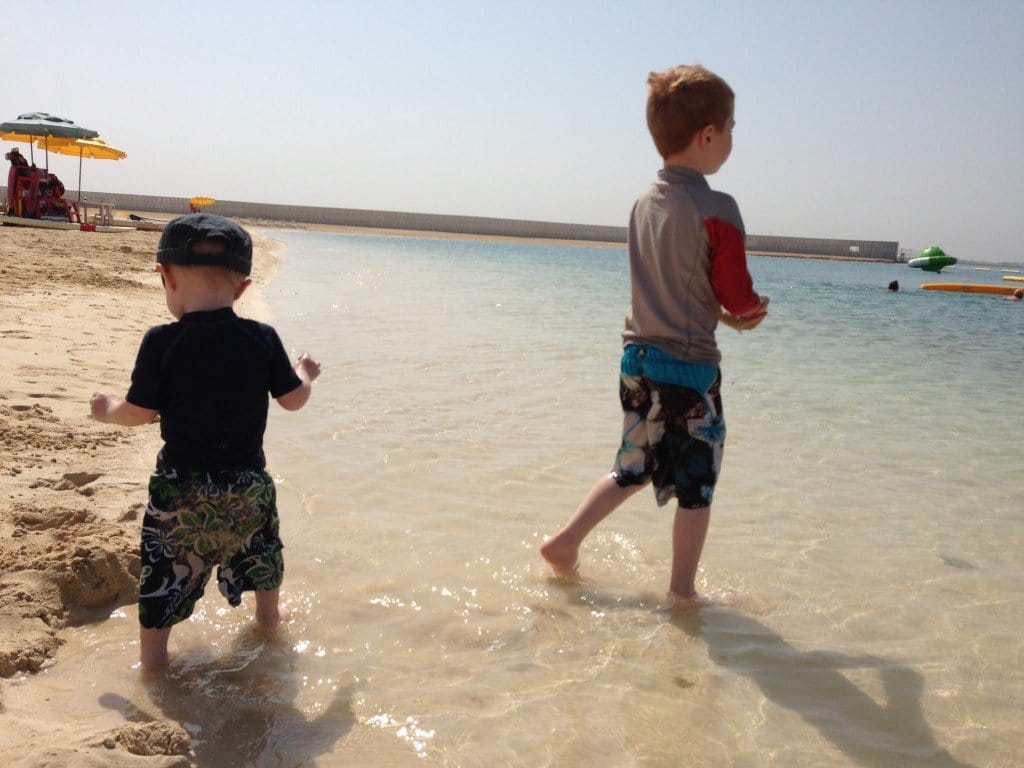 The next few days were filled with trips to the park, the swimming pool and lots of bus rides to explore our new area.  The kids won’t be starting school for a few more days so we’re really taking advantage of the time when I can spend lots of time with them before the baby comes.  The weather has been warm and humid but manageable (in the 80’s) so that has helped our explorations so far.

Honestly, this has been one of those weeks that has felt like a month.  We have been having such a great time and are thrilled that our kids are so happy here in our new home.

So what questions do you have for us?

We’d love to tell you more about it here!