Warning:this post has a major picture overload.  These pictures will make you want to run away and escape to the river with your family…just warning you!

What?  Did you think that rafting season had already ended?  Um, so did most people – that’s why now is the perfect time to go.  A multi-day rafting trip’s main goal is to get away from people, so off we went! 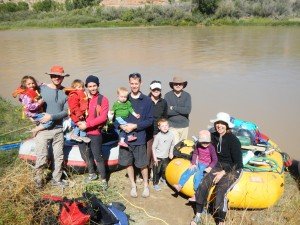 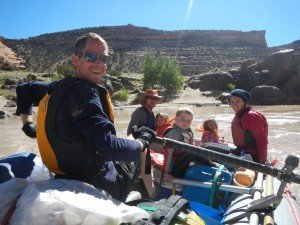 We started off the trip with more than a little trepidation.  The night before had been full of heavy rains and strong winds for the Grand Junction area.  Pretty much the 2 weather conditions you want to avoid with this many kids on board.  We pushed on, however, and when we arrived at the Loma boat launch we were suddenly surrounded by half a dozen families who were as crazy as us.  Somehow, not being alone in our adventure gave us the confidence boost that we needed to start rigging the boats. 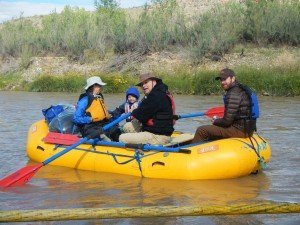 Due to all the heavy rains and flooding earlier in the month, the boat launch had turned into a swampy mess of mud, with very little workable rigging area.  You can imagine what the kids looked like after “helping” us.  Yes, they were really muddy and they marked their territory on the boats with their muddy footprints.  The “what in the world are we doing” thoughts started to flood back into my mind.  Luckily everyone was still smiling so we launched anyway (and because the alternative of packing the cars back up was a scarier one).

With a less than ideal forecast, we decked everyone out.  The kids were all wearing merino and fleece with wool socks, all topped by rain gear.  Amazingly, they all stayed comfortably warm throughout the day.  This was our first trip taking baby Jimmy (15 months), so we were especially worried about keeping him happy and warm (anything to avoid being stuck on a boat with a crying baby). 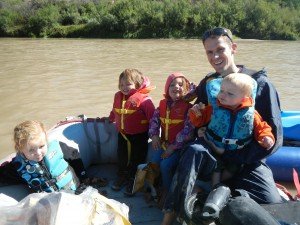 Luckily, the rigging was the worst of the mud.  Everywhere else that we stopped for lunch, camping, and even potty breaks was relatively dry (thanks to lots of cobblestones on the banks).  Slowly, the mud started to wash off of the boat…and the kids.  By lunch the first day we were all in the groove of things.  Despite a few wind struggles, we were rolling.  Enjoying the bouncing kids and the methodic rhythm of rowing the boat.  Have I ever mentioned how much I love rowing?  Oh, it’s fantastic!  If my hands were more calloused, I’d do it all day every day (oh wait, I did used to do that…but that was in my pre-mommy life). 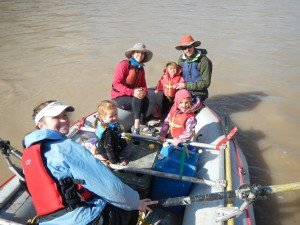 After the initial excitement wore off, wherein the kids were bouncing around like little monkeys, things really started to get great.  We got lots of time to talk, play with the kids, and point out cool formations in the amazing canyon walls around us.  It reminded me why I love to just get away from everything so much. 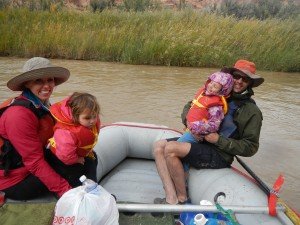 After lunch, Mason was insistent that he take his kids kayak out for the rest of the afternoon, despite the threatening rain clouds nearby.  Thinking he wouldn’t last long, he was minimally equipped, and though frozen and really wet, that stubborn boy paddled for over 3 hours.  Each time I would ask if he was cold or wanted more clothes, he would boldly say “MOM, I’m not cold.  It’s actually really hot when you’re kayaking”.  He’s a bad at lying, but was having so much fun (and he still had color in his hands and lips) that I let it pass and kept him paddling.  Yes, sometimes that’s the best thing you can do to raise a great boy – let him choose for himself! 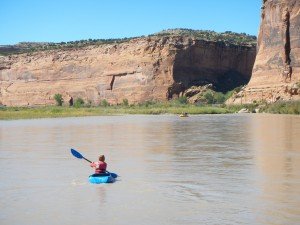 That night, we camped at Split Rock.  Most of the maps that we had showed this as right across from Dog Island and having never been down before, we thought that this would be a fun camp to allow the kids to explore a lot.  Turns out, it’s a ways past Dog Island (about 1/2 mile) and is practically right on top of Black Rocks.  Had we known that, we would have camped at Black Rocks.  Although Split Rock was fine, it had a lot of prickly plants around so it was difficult for the kids to explore.  Next time, it’s Black Rocks for sure where the water is slower, there are places where the kids can play in the water, and the campsites are more established.  Ah, hindsight! 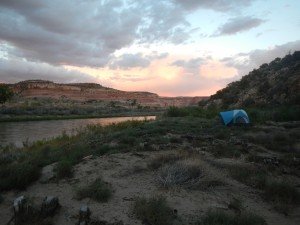 We made up for the prickly plants with an awesome dinner, a birthday cake, and roasting giant marshmallows over our massive fire.  I don’t quite know what it is, but for some reason those big marshmallows are SO. MUCH. BETTER.

Anticipating temperatures to dip below freezing, we bundled up before bed, and prayed that the weather would hold.  One major advantage to taking the kids out on a trip like this in the fall is that it’s dark earlier.  I think that the last kid was sound asleep by 8pm – it was a long, busy day and they pretty much just passed out.  Thankfully the weather held out and we all woke up toasty in the morning.  Luckily, Uncle Tony was there to rescue the kids when they emerged from the tent and greeted each with a cup of hot chocolate – perfection.  As we sat and drank our cocoa, we enjoyed a lazy morning and watching the sun hit and light up the red canyon walls around us.  It was perfect.  At that moment, none of us wanted to leave.  If only we had brought more food, we could have stayed a week.  Next time, we will stay MUCH longer! 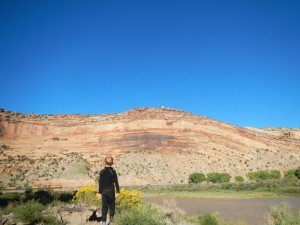 With the sun on our backs, we lazily loaded up camp and rigged the boats again.  The kids all knew the routine.  They alternated between splashing with sticks, eating snacks, and sitting on the rowers lap to help row the boat.  It was great.  Our 3 kids were feeling adventurous and after a while decided that the IK and kayak was where it was at.  Pretty much the perfect day for that since it was warm, and the calm waters made it much easier to paddle with wiggly kids climbing on my lap while I paddled. 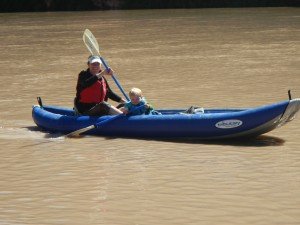 So how did the kids do?  Mason and Chloe were fantastic.  Mason has lots of day trips and a few multi-days under his belt and Chloe has also been on lots of trips – they were both superstars.  The youngest three were all novices to boating, each only having been on a boat a few times.  Our friends kids were REALLY excited about it and it took them a while to calm down and go with the flow of being trapped on the boat, but once they did, they were pretty good.  I was mostly worried about Jimmy, who has been SUPER clingy lately.  The first morning, he was attached to Andrew and pretty agitated at the excited kids all around him.  That afternoon, Andrew left to kayak with Mason and I was left to row the boat.  Jimmy was stuck in the back by himself with half a peanut butter sandwich.  Thankfully, that was just what he needed.  His own space and time to figure out this whole rafting thing.  After about half an hour of hanging out, he started to explore, bounce around, and splash at the puddles on the floor.  Once he realized that he could splash (and splash and splash and splash), he was completely content the rest of the trip.  He just hung out (for a good majority of the trip at my feet while I was rowing) and did his own thing.  A fantastic reminder that all my kids are different and it takes different things to make them comfortable. 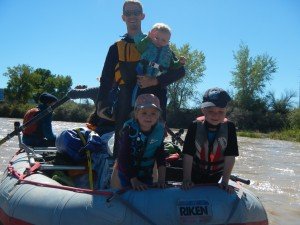 At the end of the trip, the group was all grins.  The kids caught lizards and snakes while we unloaded, and got out all of the energy they had been storing up on the boat.  We left the river revived and rejuvenated (though so sad to be leaving) and wanting to spend more time in the quiet solitude.  With a family like ours, big river trips really are the best way to experience the back country.  Yes it’s much more gear intensive than backpacking, but in many ways it’s much, much easier.  We’re already planning our next trip – how about you? 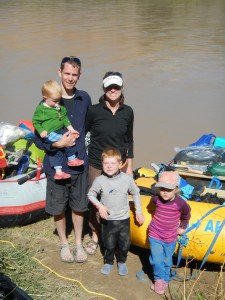 Be sure to check back in later this week for some gear that will take your trip from cool to amazingly awesome!