Let’s face it: Kids can sometimes get very expensive.  Because we try to be as careful with our spending as possible, if we’re going to spend a few hundred dollars on anything, we’re going to make sure that we get the most for our money.  This is especially true with something like ski school.  Let’s face it: many families budget some sort of money into their skiing budget for something like lessons.  By choosing multi-day lessons, you get much more bang for your buck and your kids can learn a whole lot more. 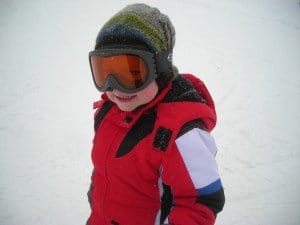 As we mentioned earlier, Mason participated in a multi-day lesson program at A-Basin in January.  He met once a week for 3 weeks with the same instructors and the same group of kids.  In the end, we were blown away by how great the program was.  Honestly, I can say that Mason probably got as much out of these three days as he would have in 5 days of regular lessons (if he would have even lasted that long).  To really see how great the staff at A-Basin is, you need to know the whole story…

The first day went great.  Mason was in a class all by himself.  Although he took a while to come out of his shell, his teacher got to see what he was really capable of.  Awesome start.

Day 2, started out ROUGH.  After a car ride full of excitement, Mason decided he didn’t want to do ski school.  WHAT!!  Not cool.  After a fantastic 4-year-old meltdown (have we mentioned that Mason’s SUPER emotional?), and Mason sitting out his first run, I was able to bribe/threaten him enough to get him out with his class.  Thinking I averted a crisis, I went in to take Chloe out to ski.  On our way out, I was met by his teacher saying that he was still having a hard time.  A little bit of talking revealed that he was upset that he just had old slow skis and the other boy in his class had fast racing skis.  ARGH!  Well, $12 and a pair of rented skis later, Mason was able to do great with his class for the rest of the day.  (not thrilled about spending the extra cash, but figured it was better than having him miss a day we had already paid for).  At this point, I was just going to be thrilled if he stayed in class, and didn’t care if he learned anything.  Much to my surprise, when we took a few runs after his class was over, his balance had shifted from being in the backseat, to being forward, like it should be, and he was matching his skis up more.  This was huge.  Even with the meltdown, he was able to still learn more than he had the last week.  Reasoning?  His teacher already had a relationship with him and could focus on a few vital techniques to improve his skiing.

Day 3.  Well, we led up to this day with lots of talks about being excited in ski school.  Andrew waxed his skis and let him decorate them with all the stickers we had accumulated at the Outdoor Retailer show.  Now his skis were fast and cool, and hopefully his attitude was in check.  I sent him off to class and things looked like they would be good again.  About an hour into lessons, his teacher comes over to the beginner lift and tells me that Mason needs me.  He had fallen twice on his last run, and although not physically hurt, he was so upset that no one else had fallen yet, that he was inconsolable (remember, he’s really emotional).  We went in to join him for some hot chocolate and help calm him down.  After talking with a few teachers, we decided it would be best not to push him too hard that day and to put him in another class.  He could still work on the things he needed, but wouldn’t feel pressure to go as fast and push himself as hard.  He still wasn’t into it.  Luckily, the other teachers were so good to work with.  I pulled his new teacher aside and asked if I could “follow” his class.  Mason was thrilled that his teacher agreed.  Chloe and I followed them up the lift and they were off with no hopes of us keeping up (yep, 4 and 5 year olds are much faster than 2 year olds).  This was all it took for Mason to be good the rest of the day.  Throughout the rest of the day, the other instructors would even give me updates on Mason and even the ski school directors kept checking in with us to tell us how good he was doing!  By the end of class that day, he had still made excellent progress in beginning parallel skiing.  And best of all, he was so happy that he could do everything that the teacher was explaining to him and that he was the best in his class.  So not only did he keep working on his skills, but his confidence was restored.  SUCCESS!

After it was all over, I felt like the staff not only cared about teaching skiing, but about what would be the best for Mason.  They really went the extra mile to make him happy and successful.  This is something that really set them apart from other ski schools.  If we had just signed up for a daily lesson, we would have stopped at 2 lessons without a doubt.  However, because we were in the program, we went to all three days, and I’m so glad we did.  The third day was vital to Masons independence and confidence.  Without such a good staff, this could have been a disaster, but the experience and training that these instructors had, turned this difficult situation into a great success for us.  In the end, Mason learned to ski much better and more confidently, and I got some good one on one time with Chloe to work on her skiing.

Here are some more of the wonderful things about putting your kids into a program like this.

–  It’s usually much cheaper than the same number of days of individual ski school (in this case, A-basin charges $110 for one day, or $210 for this 3 day program).

–  Since they have the same instructors, kids are able to progress much faster.

–  Groups often get to know each other very well.  In our case, Mason became really good friends with the other kids in his class and was excited that he knew other kids his age who are fun to ski with.

–  You can get time to ski by yourself (or in our case, with your other kids)

In the end, if you can afford it, we would encourage everyone to sign up for multi-day lessons as opposed to a single day.  We had a fantastic experience at A-Basin
and would highly recommend their programs!

Thanks to Arapahoe Basin for offering us a discounted lesson so we could write this story.