Have you ever considered a stopover in a major city?  Often times you can get a short stopover (24 hours or less) for the same price as just a layover.

When we had a chance to do this in London recently, we jumped at the chance.

Our flight arrived at about 11:30pm and our next flight departed at 10:30 the next night.

We found a cheap hotel (well, by London standards…which seriously was so hard…London you are PRICEY!!), went straight to bed and slept in a bit in the morning.  We knew that the kids would be really TIRED after the late flight, but at the same time, we figured we could handle tired kids for just one day as long as we kept things interesting and kept feeding them snacks!!

Our first stop was a walk through Kensington Gardens.  Honestly, everyone would have been completely happy to just stay there and explore for the day.  It is so beautiful and the Diana Memorial Playground was MAGICAL!!  We literally had to pull them away from it, but with only a little bit of time, we had to stick to a schedule. 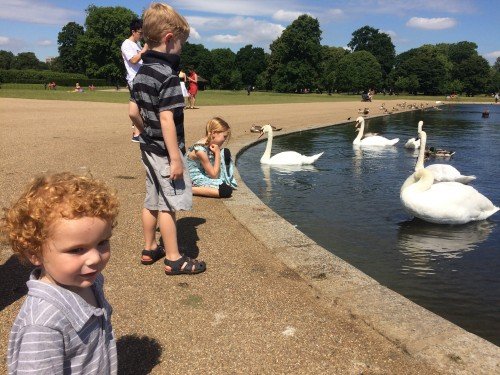 Our plan was simple.  We’d get a 24 hour hop on hop off bus ticket and see as much as we possibly could.  When the kids were excited about something (and not dozing off), we got off and checked it out.  Otherwise, we just got a nice easy ride through the city to soak it all in. 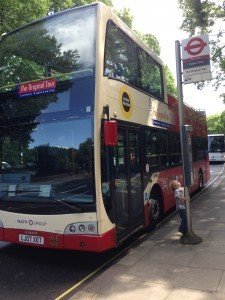 Honestly, getting these bus tickets was the BEST. IDEA. EVER.  (We’d always avoided them in the past, counting them as too touristy and pricey, especially with 7 of us.)

Everyone loved being on top of the open bus and seeing everything, and we never had to worry about a crowded metro, or finding a cab (or 2…there are too many of us for just one these days).   We got to see just enough of the city to know that next time we have to stay for at least a week…or two.  We usually aren’t big city people but London quickly won our hearts over.  The kids especially loved it because so many of the books they have read are based in England, so seeing these sites, made everything really come alive for them. 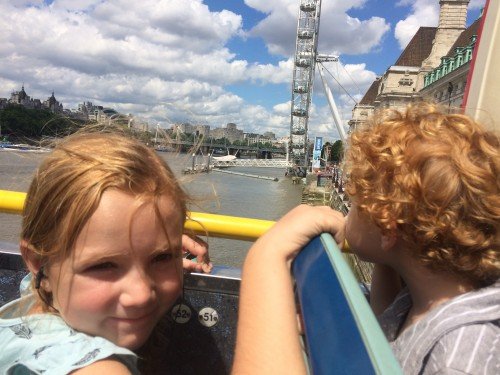 They got to see Big Ben, Tower Bridge, The Tower of London, The London Eye, Buckingham Palace, and SO MUCH MORE!  We even got a cruise of the Thames included in our ticket which was a great change of pace from the bus! 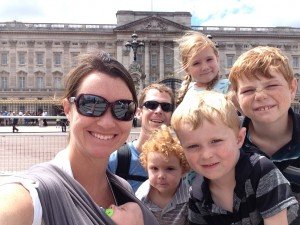 By dinner time, the bus tours were coming to a close, and the kids were dragging like crazy.  We knew we needed one last burst of energy to get everyone back on the metro and to the airport, so we did what every desperate parent would do.

We took them to HAMLEYS!!

Again, we could have stayed here all day and easily spent their entire college savings on the cool toys that were there.  Amazingly enough, no one asked me to buy them anything (too bad they had no idea that I was totally prepared to buy them something).  I guess that’s what happens when there are no real toy stores where you live in Saudi Arabia and everything in life comes to you from Amazon… Basically, they were just happy to look and see all of the amazing exhibits and displays!  I was mind blown! 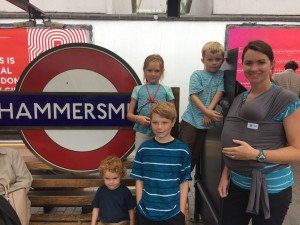 That stop was just what we needed to reenergize us for our trip to the airport.  By the time we got to the gate, 2 out of the 5 kids were sleeping and the others fell asleep quickly on the flight.

The verdict?  A stopover in London will always be worth it for us!!

Head over here for more FREE things to do in London! 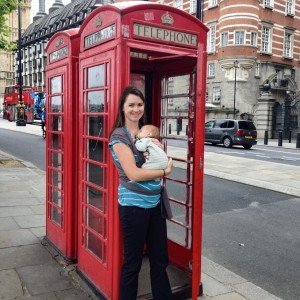